Before tonight, almost nobody at Rotterdam Collectief knew that Robert wrote poetry. During the day, Robert runs Lusis ICT. At night, however, Robert writes novels and poems. For this evening, Robert and Silvia Testa, designer and illustrator, worked on a project together. Robert wrote a poem that was illustrated by Silvia.

If my time were up today
I’d say:
It wasn’t worth the bother

So I tally’d up the tab that’s me
What could have caused such poverty?
And it’s here that I discover:

Erika, who makes her own miso and other fermented Japanese foods at WAKEAT., prepared a selection of fermented meats, Japanese croquettes and salads with miso-dressing. To offset the meaty main course (most food at RoCo is usually vegetarian), Charlotte served a vegan miso-banana cream pie. 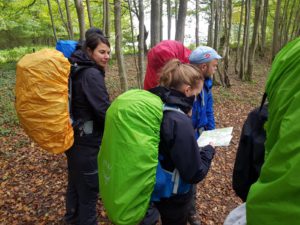 OOH! MISO: A Workshop by Erika Hirose from WAKEAT.